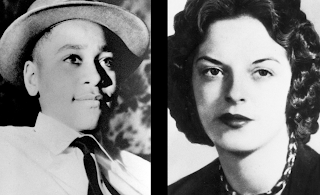 A Mississippi grand jury declines to indict Carolyn Bryant Donham after a 70-year-old warrant for her arrest in connection with the murder of Emmitt Till is uncovered.
The Daily Mail reports

A grand jury in Mississippi has declined to indict the white woman whose accusation set off the lynching of black teenager Emmett Till nearly 70 years ago, despite revelations about an unserved arrest warrant and a newly revealed memoir by the woman, a prosecutor said Tuesday.

A Leflore County grand jury considered evidence and testimony regarding Carolyn Bryant Donham's involvement in the kidnapping and death of Till, Leflore County District Attorney Dewayne Richardson said in a news release.

After hearing seven hours of testimony, they determined that there was not sufficient eveidence to indict Donham. Charges of both kidnaping and manslaughter were considered.

Last week, DailyMail.com exclusively revealed that Donham, 88, is living in a small apartment community in Kentucky. She suffers from cancer, is legally blind and is receiving end of life hospice care - and photos showed her with oxygen tubes looped over her ears.

Asked if she or her son, Thomas Bryant, would speak about Till and the events that destroyed and re-shaped the worlds of so many, Bryant, shook his head while Donham stood by silently.